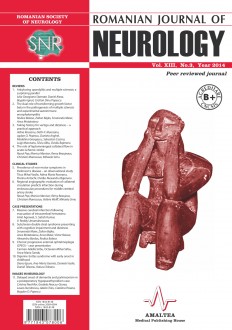 Ankylosing Spondylitis (AS) and Multiple Sclerosis (MS) are two different chronic autoimmune and inflammatory diseases, one rheumatic and the other one neurological, apparently without any connection between them. Yet a few case reports proved that AS may be associated with MS and this situation should be considered in some epidemiological environment.

Although the geographic map of incidence is approximately superposed for both entities there are only a few cases of association. Recent studies revealed that most loci associated with MS are located very close to or even within genes encoding molecules involved in immune system function, confirming the hypothesis that MS is a disease with immunologic mechanism. In addition, some of these loci are also associated at least with another autoimmune disease, thus reinforcing the idea that autoimmune diseases may have a common origin.

If MS is more common in patients with AS than in the general population, we can speculate the existence of common factors involved in these diseases. Because of the limited number of cases that associated these two diseases, the correct diagnosis of both entities considered separately or together becomes mandatory especially reflecting on the anti-TNFα agents used to treat AS which may exacerbate or induce a latent MS or demyelination processes in the central nervous system. In terms of pathogenic mechanisms, they are poorly known in both diseases, but each is characterized by an initial immune and inflammatory attack, in MS the target is the myelin sheath and in AS the enthesis tissue. A case with association between the two diseases raises important issues in choosing an appropriate treatment.