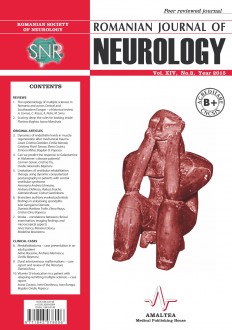 DYNAMICS OF ENDOTHELIN LEVELS IN MUSCLE REGENERATION AFTER MECHANICAL TRAUMA

Objectives. Muscle regeneration after trauma is a complex phenomenon involving several cellular processes, such as angiogenesis, inflammation, fibrosis, activation of satellite cells and their differentiation into myocytes and myotubes. Although many studies explored these mechanisms in the last years, there is still an unmet need to find new therapy targets, especially regarding some cellular molecules involved in muscular recovery after mechanical or pathological injury. In the present study we investigated the dynamics of endothelin-1 (ET-1), an important factor that has been shown to be involved in all stages of tissue regeneration, but which is poorly investigated in skeletal muscle.
Materials and methods. We used an experimental animal model of acute mechanical trauma on mouse gastrocnemius muscle. ET-1 levels were investigated at different time-points after muscle injury by in situ immunofluorescence, xMAP assay on tissue and serum samples, and Western Blot analysis.
Results. By xMAP assay, tissue ET-1 levels increased significantly up to the 5th day after trauma, correlated with serum levels. xMAP assay was confirmed by Western blot analysis which showed a significant increase in the level of ET-1 towards the end of the first week after trauma. This corresponds with the inflammatory stage of the regeneration process, followed by angiogenesis and satellite cell activation. In situ immunostaining showed a multiplication of interstitial cells expressing ET-1 in the first week after muscle injury. Two cellular subtypes were detected in the connective tissue – one is represented by blood-derived CD45 positive cells and the other by local interstitial cells. Such cells were detected in all connective tissue compartments, in close association with CD56 positive satellite cells, myoblasts and myotubes and most of them co-express sca-1.
Conclusions. The present study demonstrated that ET-1 is synthesized mostly by mesenchymal progenitors and their number greatly increases after mechanical trauma in muscle interstitium. Based on ET-1 expression and their close association with activated satellite cells, such cells could have a paracrine influence not only over angiogenesis but also over fiber regeneration. ET-1 appears as an important molecule working in conjunction with other various signalling pathways especially during first stages of the regeneration process after acute mechanical injury. ET-1 and its receptors could become therapeutic targets, especially for inflammatory myopathies and muscular dystrophies with significant pathological fibrosis.