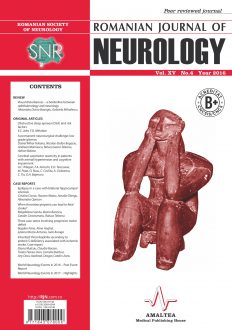 Introduction. The utilization of Magnetic Resonance Spectroscopy (MRS) brings an important piece of information to an overall MR study, thus aiding the physician in making an accurate assumption regarding the histological grade of a tumor. The purpose of this study is to verify the reliability of MRS in correctly diagnosing both the nature of tumors and their grade.
Material and methods. This is an observational study that was conducted from January 2011 to June 2016 on 49 patients confirmed to be low-grade gliomas (LGG) by pathological examination, who were admitted in our Neurosurgery Department in this period. Both retrospective and prospective data were collected. Inclusion criteria comprise unique tumoral lesion at the moment of diagnosis, follow-up for at least one year. Exclusion criteria included: other types of tumors with any location, patient refusal to undergo histopathological examination of the resected tissue, uncompliant and non-collaborating patients. Of all patients, 22 were subjected to an MRS study which suggested the presence of a low-grade glioma subsequently confirmed by the pathological examination.
Results. MRS has been shown to provide accurate non-invasive diagnosis of LGG’s, by analyzing the concentration of metabolites inside the lesions which tend to be specific for these tumours: relatively elevated levels of N-acetylaspartate and creatine with reduced levels in the concentration of choline and absent lipids and lactate. It has also been observed that pre-operative MRS assists the physician in selecting the optimal place for biopsy, so that the pathological examination provides conclusive results.
Conclusions. With the increased availability of MRI technology, MRS comes as a milestone in the advancement of more accurate and patient-friendly methods of diagnostic for pathologies as LGG’s which constitute a permanent challenge for neurosurgeons. The results of this study underlines the importance of MRS as a method for follow up patients with LGG, but cannot replace the need for obtaining bioptic tissue for pathological examination, especially after the new grading system of WHO, which was published in June 2016. This new grading system takes into account the molecular biology in predicting the natural history of cerebral tumours.