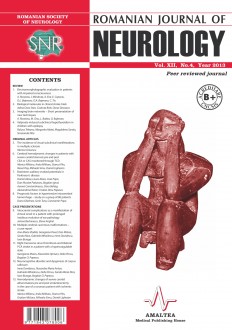 THE INCIDENCE OF VISUAL SUBCLINICAL MANIFESTATIONS IN MULTIPLE SCLEROSIS

Optic neuritis is often the initial manifestation in multiple sclerosis (15%). There is a significant percent of patients affected by clinically definite multiple sclerosis that report no ocular symptoms. Some of this patients complain of poor vision despite the 6/6 visual acuity with Snellen test. Subclinical visual abnormalities may be revealed by more sensitive measures of visual function. Alteration of visual evoked potential latencies associated with brain MRI lesion burden, standard achromatic perimetry and low-contrast letter acuity, may detect subclinical visual manifestations. In this study we compare the efficiency of electrophysiological test (visual evoked potential) and subjective tests (contrast sensitivity and standard achromatic perimetry) in detection of visual impairment in a population of asymptomatic patients with clinically definite multiple sclerosis.

Methods. Eighteen eyes of nine patients affected by clinically definite MS, without visual disturbances and optic neuritis history. All the patients were recruited at the Department of Neurology of Emergency Universitary Hospital of Bucharest. Of the nine patients, 3 were male and 6 female. In all the cases the disease was in remission.

Conclusions. In patients affected by MS with no history of optic neuritis and no visual symptoms, there is large prevalence of visual pathway involvement that can be detected by performing multiple tests. Only a combination of CS, VEPs and SAP can detect most cases of visual dysfunction associated with MS.