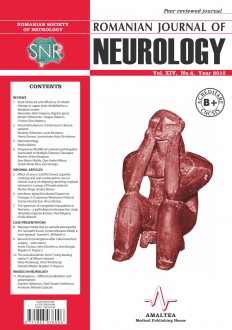 A forum for responsible and ethical research publishing – Code of Conduct and Best Practice Guidelines for Journal Editors.

Objective. The authors interest was focused on interferon impact on dopamine status and on the relation between negative emotional state and dopamine in melanoma patients.
Methods. 60 patients diagnosed with malignant melanoma in 1st or 2nd clinical stage were included in the fi rst 56 days after surgical removal of the tumor in an observational prospective study. The patients were divided in 2 groups: group A that included 30 cases treated with 10MU interferon alpha2b/mp three times a week for one year and group B that included 30 cases with no adjuvant treatment. Urinary dopamine (ELISA) was evaluated before treatment with interferon alpha2b, after 1, 6, 12 months of treatment and after 6 months from the end of the treatment. Neuropsychiatric disorders were grouped according to their frequency in melanoma patients.
Results. Neuropsychiatric disorders associated with the treatment with interferon were: irritability, asthenia and fatigability, sleep disorders, anxiety, cognitive disorders, somatic symptoms. The treatment with interferon altered dopamine metabolism. Dopamine returned to the pretherapeutical values at six months after interferon was stopped. Patients with low levels of urinary dopamine had a high, statistically signifi cant risk of developing depression during interferon treatment (OR=2.647, IC=2.186-3.014, p=0.0216).
Conclusions. Low dopamine might have a major role in the development of depression secondary to interferon treatment.