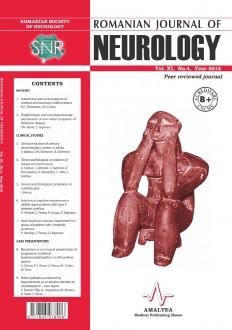 This article describes the anatomical and clinical aspects of cerebral arteriovenous malformations which from thestart won the role of an important cause of death or severe morbidity in the long term due to intracranial hemorrhage and secondary epilepsy. It is the second leading cause of aneurysms after subarachnoid hemorrhage. Cerebralarteriovenous malformations present a nidus fed by one or more nourishing arteries (“feeders”) with deep or superficial venous drainage. Symptoms are determined by the presence of seizures and intraparenchimatous and/or subarachnoid bleeding. Progressive neurological deterioration can exist, which is attributed to ischemic disorders due to “vascular theft“. Also, it is described the grading system of arteriovenous malformations depending onsize, eloquence and venous drainage by Spetzler-Martin system. Also described, a number of other scales with prognostic role and evaluation of the patient’s consciousness, but in was in 1988 when the World Federation of Neurological Surgeons proposed a simplified scale, based on clinical findings of Hunt and Hess scale, translatedinto GCS, WFNS grading scale SAH.